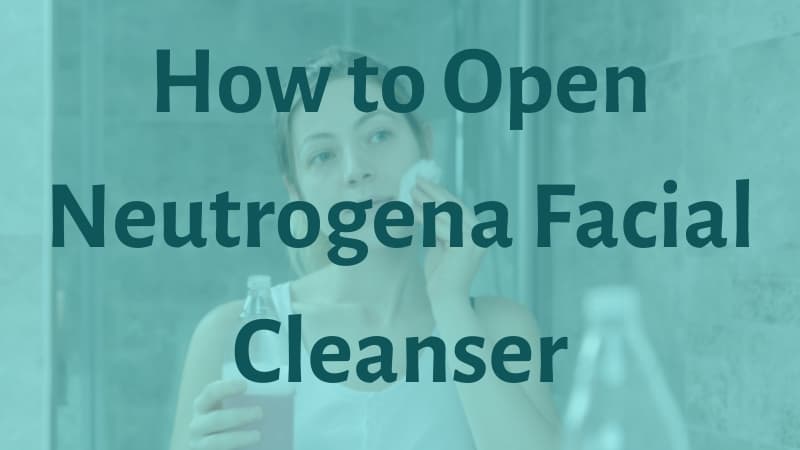 How to Open Neutrogena Facial Cleanser? – Easy Way to Open

Neutrogena is one of the most famous beauty brands. Products from this brand are great to have in your grooming kit.

As a result, this is a common situation that someone has picked a facial cleanser from Neutrogena and doesn’t know what to do after that because the pump is not working.

This is a disgusting situation. Most people open the whole cap and pour the cleanser on hand when they can’t figure out how to squeeze it on their hands.

If you’re one of them, this article is for you.

How to Open Neutrogena Facial Cleanser?

I’m pretty sure that you’re spinning the spigot counter-clockwise because the arrow said so. If you’re doing it, you’re doing the right thing.

But there is a thing to focus on.

When you’re making the pump spinning, the inner ring is also spinning. As a result, no matter how much your spin it, the inner ring won’t be disconnected to provide the cleanser a way out.

To open the bottle and get the cleanser a way out, you should stop to inner from spinning when the spigot is spinning counter-clockwise. But it is almost impossible using bare-hand.

Here is the trick for you.

Have a saran wrap, thin cloth, or anything long enough to wrap around the inner right more than twice. You won’t have to wrap it around but need enough scope of holding it properly.

Shirk it so that it looks like a rope or something like that. Use it to press and hold the inner ring down when you’re spinning the spigot.

Spin the spigot counter-clockwise keeping the inner ring down and BOOM! The bottle is open.

Try pumping the spigot and you’ll see that the cleanser is coming out of it.

Using saran wrap or thin cloth is not mandatory. If you want to go harder (you know what I mean), you can use pliers to hold the inner ring down.

I guess you’ve got it. Using this trick will save you from the struggle you’re facing to get some cleanser on your hand from the bottle of Neutrogena.

I’m pretty sure that Neutrogena has used this type of lock system to keep the cleanser inside in the best condition. But they could include the proper way or at least some tricks to open the bottle.

I guess no one has left using the brand because of this difficulty of opening the bottle. This is not a wise decision at all. Neutrogena is one of the most popular beauty brands and it has enough reason. It provides gentle and quality products for your skin.

So, if you’re thinking of leaving the brand, don’t do it. The trick I’ve stated works perfectly to open the pump of the bottle. Just use the trick above and you’ll be able to get the cleanser in hand easily. You won’t have to continue the struggle anymore.